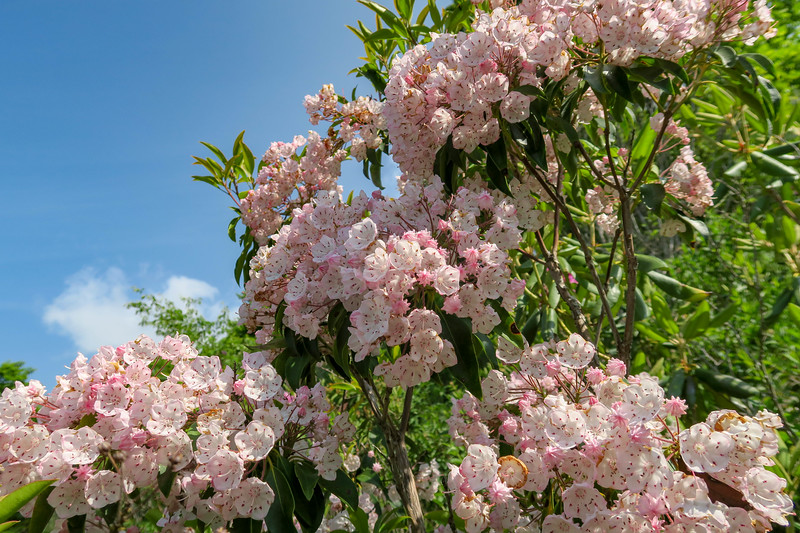 The Greasy Cove Trail is a wild and seldom visited footpath located in the southeastern corner of the rugged Shining Rock Wilderness. Running from near Ivestor Gap high atop the Shining Rock Ridge down to the boulder-strewn channel of the East Fork Pigeon River this is a trail with no easy roadside access points, meaning a hike of the trail from end-to-end requires a lengthy and challenging dayhike from any approach. As I tend to avoid out-and-back hikes when possible I decided to incorporate my hike of the Greasy Cove Trail into a large loop utilizing the Mountains-to-Sea, Graveyard Ridge, and Bridges Camp Gap Trails. I knew ahead of time this would be a challenging trek so, to make the most out of the effort required, I decided to add in a side trip up to the stunningly beautiful summit of Grassy Cove Top as well. This would push the total length of the hike to nearly 13-miles and, with over 2,300-feet of elevation gain, I recognize this likely adds up to a trip which is outside the ability range of the average hiker. If you do decide you want to attempt it your reward will be stunning high country vistas, remote rivers and cascades, and solitude the likes of which you rarely get to enjoy in the Shining Rock vicinity. Also, I’d highly recommend a map, either taken with or studied closely ahead of time. There are numerous trail junctions to navigate, some of which can be a bit confusing, as well as the fact that a good half of the hike lies within a federally designated wilderness area…meaning no signs or blazes are permitted within those boundaries. Have I scared you out of this one yet? If not, read on…

The hike begins from the often-overcrowded Looking Glass Overlook at MP 417 along the Blue Ridge Parkway. Most of the folks stopping here are on their way down to nearby Skinny Dip Falls, one of the areas unfortunate waterfalls to go from virtually unknown to overrun in recent years. To beat the crowds do as I did and get a good early start…like before 9am early. The access path to the Mountains-to-Sea Trail (MST) is located directly across the Parkway from the overlook. Following it barely 200-yards you’ll arrive at the MST itself and the start of the loop. Go straight ahead at this junction and you’ll immediately begin an extended descent which ends, 1/3-mile later, at the aforementioned Skinny Dip Falls. Arrive early and you might have the scenic cascade to yourself…mid-morning or later and you’ll arrive amidst a crowd. Crossing the footbridge over the narrow gorge at the base of the falls the MST makes a hard right to make its way east far above the river. Initially the route is fairly flat but, as the trail begins to round the east end of the ridge, the grade increases. By the time the trail turns back west to ascend the north side of the ridge a few of the pitches are downright steep. There’s not much to see along this stretch, just thick forest and dark rhododendron groves. A little over a mile from Skinny Dip Falls the climb eases again as the trail gains the crest of the ridge. At 2-miles from the trailhead the junction with the connector path to Graveyard Fields is reached and, after another moderately steep half-mile, the MST’s eastern junction with the Graveyard Ridge Trail which you’ll now bear left onto.

The Graveyard Ridge Trail offers a nice respite from the climb which precedes it as it winds a mostly flat 1.3-miles along the south side of Graveyard Ridge. A couple large openings provide views of the adjacent Graveyard Fields area below as well as ahead up to the towering ridgeline of 6,214-foot Black Balsam Knob. At the west end of the ridge the Graveyard Ridge Trail once again meets the MST. This is a potentially confusing junction so, to stay on the GRT, simply head straight ahead (north). At this point the Graveyard Ridge Trail gets much more narrow and overgrown. It’s obvious that this upper 2-mile section of the footpath sees far fewer visitors than the trail that came before on the hike. As the route snakes north along the east side of the ridge there are some impressive views up to black Balsam Knob and the rugged southern face of neighboring Tennent Mountain. When the trail crosses the crest of Ivestor Ridge, Grassy Cove Top briefly comes into view as well as some decent looks to the east down the valley of Greasy Cove Prong. After crossing a rather wet portion of trail the path then climbs one final time to the ridge just east of Ivestor Gap where the Greasy Cove Trail is met. If summiting Grassy Cove Top doesn’t interest you then the loop continues by turning onto the Greasy Cove Trail. You’ll save yourself 2-miles of walking and 400-feet of climbing but, trust me, after coming all this way what awaits you at the top is more than worth the bit of extra effort added to the hike.

So, if you’ve decided to head up Grassy Cove Top keep on the Graveyard Ridge Trail for another quarter-mile until its junction with the Art Loeb Trail at the beautiful, grassy Ivestor Gap. Turn north on the Art Loeb here. The trail now begins an extended, somewhat steep and rough, climb up around the east slopes of Grassy Cove Top. Three-quarters of a mile later you’ll crest the ridge to the north of the peak where, at an unmarked junction, the summit spur trail heads uphill to the left. After a short climb through the thick heath covering its north slopes you’ll soon arrive at the top of Grassy Cove Top…and promptly wonder why you bothered with all the effort to get here. There’s not much to see from the broad, brush-covered summit. Don’t despair, the good stuff isn’t far off. Simply pick up one of the paths heading towards the south side of the peak and before you know you’ll emerge at one of the finest summit viewpoints anywhere in the Pisgah Ranger District. The majestic panorama faces south, with the massive summit ridge of Black Balsam Knob dominating much of the view. Below is the open fields of Ivestor Gap. To the east is the easily recognizable cone of Mount Pisgah. To the west the dark and foreboding summits of the Great Balsam Range. The spectacle is awesome and, the best part about it…you’ll likely have it all to yourself…an exceptionally rare treat among the peaks of the Shining Rock Ridge. After digesting all the eye candy you desire simply head back over the summit to the Art Loeb Trail, retrace your steps south to Ivestor Gap, and return east the quarter-mile on the Graveyard Ridge Trail. Now it’s time to tackle the Greasy Cove Trail.

The Greasy Cove Trail starts out easy enough, though you’ll immediately notice you’re one of very few people to walk it as the route is narrow and frequently all but overgrown. Aside from a few brief views at the start, it also immediately takes you back into the forest where it will remain for its entirety. Its 1.5-miles from the Graveyard Ridge Trail to Greasy Cove Gap. There’s one fairly steep stretch about halfway along, but this is just a warm-up for things to come. The feeling of wilderness is immersive here. In all likelihood, you won’t see or hear another soul as you wander the grass and fern carpeted forest atop the ridge. At Greasy Cove Gap the trail makes an abrupt southward turn and you’ll immediately thank yourself for using this trail on descent rather than vise-versa. Over the next mile the route drops a knee-punishing 1,000 vertical feet. By the time you reach the crossing of Greasy Cove Prong and its scenic accompanying cascade, you’re shaky leg muscles will no doubt be ready for a breather. Beyond the crossing of Greasy Cove Prong the steep downhill hike continues, but only for another quarter-mile, at which point you reach blessed level ground along the wild East Fork Pigeon River. If the water is up this can be a tricky, if not dangerous, crossing. I managed to hit it during low levels so managed to stay dry as I hopped across. I wouldn’t expect this most times, however. Once across you’ll emerge at a large campsite with trails heading upstream and down. Downstream is the Big East Fork Trail…to finish this loop, however, follow the Bridges Camp Gap Trail which heads upstream.

The Bridges Camp Gap Trail starts out easily enough, ascending at an easy to moderate grade. After the punishing downhill hike prior, though, it’ll probably take your muscles time to switch back to an uphill gear. For ¾-mile the trail follows above the East Fork until, at a signed switchback, it turns to climb the steep ridge back towards the Blue Ridge Parkway. This is the last big climb of the hike…luckily it only lasts about a half-mile, at which point you reach the upper end of the Bridges Camp Gap Trail at its junction with the MST. Keep straight to head westbound on the MST and, after another short climb and brief descent, you’ll arrive back at the access trail to the Looking Glass Overlook and the end of the hike. As I said earlier this isn’t a hike for everyone. It requires planning and an honest evaluation of your abilities before you attempt it. If it’s doable for you, however, your reward will be one of the more scenic, varied, and quiet hikes you can make in the Shining Rock vicinity. This is a toughie but definitely a goodie…come along with me now as I make the challenging loop of the Greasy Cove and Graveyard Ridge Trails (with a side trip to Grassy Cove Top). As always…I hope you ENJOY!!