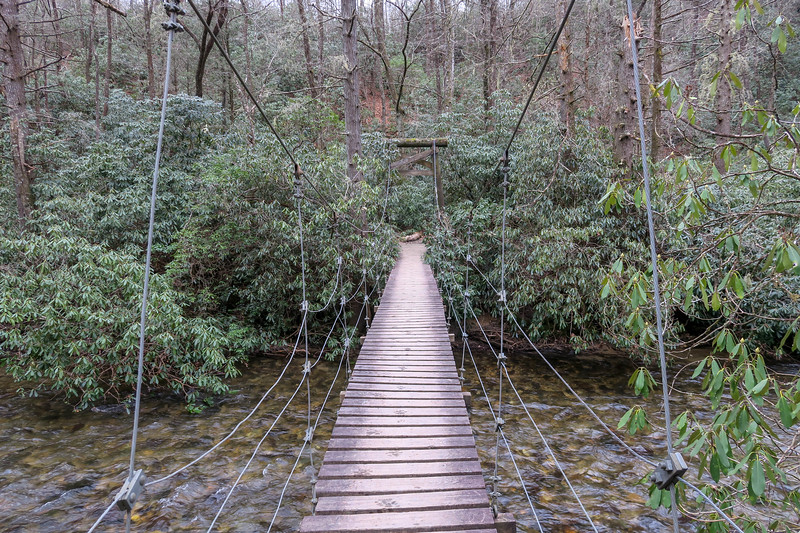 Ever since making my first hike into the area of the Pisgah Ranger District accessed from the Turkeypen Trailhead I’ve been anxious to get back. That hike, taken on the eve of the season’s heaviest snowfall, had introduced me to an area I had yet to really explore and what I found…rivers and deep forests crisscrossed by pleasant woodland trails…made for a surprisingly enjoyable visit. In the intervening month snow and heavy rains had deterred a second visit. In fact, on this trip, yet another winter storm was moving in but I was determined to squeeze in another quick loop hike through the area. I had decided prior that this next loop would involve a hike combining the Poundingmill, Squirrel Gap, and Mullinax Trails. It didn’t look to be all that scenic a loop but it would be something quick and not altogether that strenuous which is what I needed this day. The experience pretty much turned out exactly that way. A mix of streams, forests, and thick groves of rhododendron all combined for a day out in Pisgah much like my first visit to the Turkeypen area. Nothing spectacular…just relaxing and enjoyable. So it was that I found myself on yet another dreary weekend morning ready to head out into the hills surrounding the South Fork Mills River.

The hike would begin from the aforementioned Turkeypen Trailhead, which is located at the end of Turkeypen Road off N.C. Highway 280 just to the east of Brevard. Three trails break out in different directions from the parking lot at the trailhead. The one I was interested in for this hike would be the South Mills River Trail which departs alongside the large kiosk at the far end of the lot. The trail begins with a moderate descent for about a half-mile where it turns to cross the South Fork Mills River via an impressive suspension-type footbridge. The views of the South Fork from the bridge are wonderful as the wide mountain stream rushes beneath you. Beyond the bridge the trail cuts right and then shortly thereafter sharply left to ascend upstream along the north side of the river. At first the trail climbs gradually, soon passing the Mullinax Trail on the right which will be used to complete the loop later on in the hike. Beyond the Mullinax Trail the South Fork Mills River Trail winds along the hillside, sometimes high above the river and sometimes dropping down to the forested floodplain alongside it. About a mile and a half from the bridge, just beyond a particularly inviting spot where a large rock protrudes far out into the river, the junction with the Poundingmill Trail is reached. Turning right onto the Poundingmill Trail it is immediately apparent this is a much less used footpath than the South Mills River is. The narrow trail ducks up into the rhododendron and immediately hops across tiny Poundingmill Branch, for which it is named. Get used to seeing this tiny stream. Over the next mile the trail will bounce back and forth across it no less than fifteen times! Luckily none of the crossings involve more than a simple hop but, if there’s been recent heavy rain, I’m sure they could quickly become more of a nuisance. As it was the biggest difficulty I encountered wasn’t all the crossings but rather all the collapsed rhododendron from the heavy snows a month prior. I spent a good deal of time punching my way through and ducking around branches all along the lower three-quarters of the trail. It could be some time before the trail is cleared of this mess so just be prepared in the short term if you go. Other that the Poundingmill Trail is quite nice. Other than its extreme upper end it climbs at a fairly easy grade and the hills surrounding it are quite pretty. The last push to the Squirrel Gap Trail is by far the steepest stretch (indeed it’s the steepest of the entire hike) but the climb is short lived. The loop here turns (right) to follow the Squirrel Gap Trail to the east and south.

The next three-quarter mile walk is an easy one as the Squirrel Gap Trail follows along the steep northern slopes of the ridge. In the winter there are broken views of the surrounding hills as the trail starts with a gentle downhill grade, than about halfway along makes an easy climb up over Mullinax Gap, then drops slightly to meet the Mullinax Trail itself. At this junction the Squirrel Gap Trail continues on to the left. Heading straight onto the Mullinax Trail there’s a moderate but short climb to complete as the path crosses another low arm of the ridge. On the far side there’s a quick drop via a couple short switchbacks into another valley which eventually leads back down to the South Fork Mills River. Just past its halfway point the trail makes a sharp left turn to follow the side of the ridge in a northerly direction for a short time, then turns south again to meet the South Mills River Trail after 1.2 miles.

Back at the South Mills River Trail the loop portion of the hike is complete so from here it’s simply a backtracking down to the bridge over the South Fork and then making the climb back up to the trailhead. Overall I’d say this was a fairly enjoyable hike. Again, there’s nothing truly spectacular to note along the way but it provides yet another pleasant option for exploring the hills surrounding the Turkeypen Trailhead area. It’s neither overly long nor overly strenuous so it’s suitable for just about anyone who would just like a simple walk in the woods. That said, let’s get to the album. I present to you a hike around the Poundingmill-Squirrel Gap-Mullinax loop from the Turkeypen Trailhead. As always…ENJOY!!!