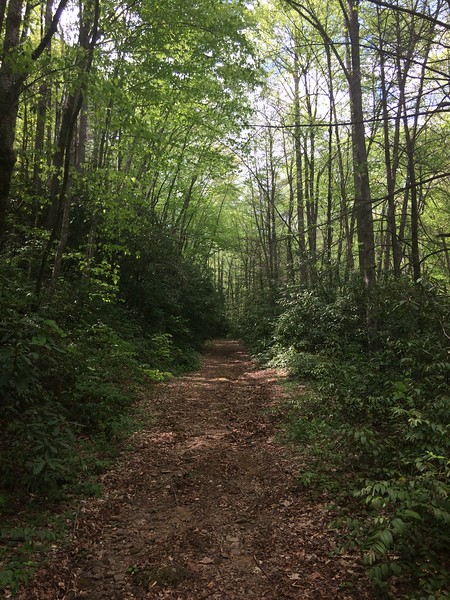 Upper Courthouse Falls is a bit of a mysterious waterfall.  It seems that guides to the waterfall can't agree exactly which cascade on the upper reaches of Courthouse Creek is THE Upper Falls.  There are two contenders, both of which are accessed via an old trail road which extends from the gated north end of F.R. 140 about a half mile above the parking area for the much more popular (lower) Courthouse Falls.  Three quarters of a mile upstream from the gate is a 20' high sliding cascade that most guides refer to as Upper Courthouse Falls.  There is one guidebook that doesn't, but its a major one...Kevin Adam's North Carolina Waterfalls, which is widely regarded as the regions preeminent waterfall guide.  In Adams book Upper Courthouse Falls is located another 3/4 mile above the sliding cascade.  Perhaps the ease of access for each contending cascade is a deciding factor in which people consider the actual falls.  The lower sliding cascade involves an easy, open, and fairly flat walk while the upper cascade requires a quasi-bushwhack, numerous stream crossings, and a good deal more vertical to climb.  I chose to defer to the wisdom of Mr. Adams and set my sights on the upper cascade.

The hike itself didn't turn out as bad as I expected.  With no maintained trail I was fully ready to involve myself in yet another brutal Southern Appalachian bushwhack.  What I found, however, was an unofficial 'trail' in nearly as good condition as some lesser used but maintained trails in the area.  The hike to the first cascade was easy and my first impression was, "This can't be it."The 20' slide just didn't seem to be deserving of the designation 'Upper Courthouse Falls.'  Further convinced then that the upper cascade must be the actual falls I followed the narrower and more rugged trail upstream.  During periods of high water this hike wouldn't be recommended.  Any of the half dozen-or-so crossings would be tricky if the creek was up and in one place you actually need to follow the creek bed for a short distance.  Without too much difficulty (and not having to involve myself in anything I'd consider true bushwhacking) I arrived at the beautiful Upper Courthouse Falls.  Upon seeing it there was no doubt that this falls must be the true falls.  Maybe 40-feet in height, Courthouse Creek here cascades off numerous multi-colored rock ledges beneath a towering rock wall.  The setting was amazing.  So, if this has perked your interest I invite you to come on along with me and see what I discovered...